I'll admit, I've never been a lore buff when it comes to World of Warcraft. I've played long enough, and paid just enough attention, that I'm familiar with who key figures are within each faction. Having said that, I am taken aback by my reaction to the story line WoW has thrust upon us with the opening of the pre-expansion event for Legion.

My memory was a little rusty as to what/who the Legion are/were. I remember them having a presence back during the Burning Crusades expansion...and that's about it. So, coming into the pre-event, I really didn't know what to expect. However, I did NOT expect events in the story line to unfold as they did. And what did I do about it?

I cried like a little school girl who lost her favorite dolly is what I did!!!!

I was, and kind of still am, totally unprepared for the final cinematic of the opening Scenario. Here I was, on my Druid Thelander, feeling all proud to be heading out with the Alliance forces to confront Gul'dan and start putting a hurt on the invading demons of the Legion. Riding along with such notable characters as Genn Greymane and Lady Jaina and feeling all important and such.

Along the way we meet up with King Varian Wrynn and continue on with our onslaught. In the distance Jaina points out that she sees Tirion Fordring and we soon learn that he is held captive by Gul'dan. We then witness the death of Tirion at the hands of a demon that Gul'dan has summoned.

This was my first "HOLY CRAP THEY DIDN'T JUST DO THAT!" moment. Again, I'm not a lore buff. However, I know that Tirion is a major character within the Alliance faction. I was in shock that Blizz killed him off.

However, there wasn't time to dwell on what had just happened. It was time to kill the demon and press on.

So, off we go to confront Gul'dan and his forces. The battle is going well but we soon become overwhelmed by the influx of demons. We witness the departure of Sylvanas Windrunner, who is leading the Horde forces in this battle against Gul'dan...and who is supposed to have our backs during the battle at hand.

With the absence of the Horde's assistance, Greymane suggests we retreat. The Alliance forces begin to board the airships to leave when all of a sudden a large Fel Reaver type demon emerges and grabs hold of one of the airships. King Wrynn is hanging on a rope ladder off the side of the airship and, instead of taking a hand of assistance from Greymane, he hands  Greymane a letter to his son, Prince Anduin, and then releases his grip from the ladder falling down onto the head of the demon. King Wrynn thrusts his sword into the head of the demon killling it, but is soon overtaken by the remaining Legion forces. He is stabbed a few times in the torso and then Gul'dan fills Varian with so much Fel Energy that he explodes.

And then the tears began...

And they continue to fall each time I run the Scenario on a different toon. Hell, I've been skipping the end cinematic on some of my toons, but I still well up knowing what's happened. I'm getting choked up just writing this. And this is confusing to me.

Like I've mentioned, I am not a lore buff. So why the tears? I don't get it. Yes, I've been playing WoW since 2006. I've never really felt overly attached to any one character in the game, other than the ones I play. But to see King Wrynn killed has effected me more than I would have imagined.

Logistically, I suppose it makes sense. Prince Anduin has grown and was sooner or later bound to take control of Stormwind as King. But, in the back of my head, I just assumed it would be when Varian grew too old to be an effective King.

I still have a few more toons I need to run the Scenario on. My prediction? More tears will flow, my cheeks will be salt stained and my shirt sleeves wet from wiping the tears away.

P.S. - For those of you who play Horde, no worries...there are no hard feelings here. After reading Navimie's post at her blog, I feel bad for your loss as well. May Vol'jin rest in peace.
Posted by Jstmel at Thursday, August 11, 2016 No comments:

Yes, I Am Still Here

I have been absent WAY too long. Sorry about that!

Roughly one year ago I found a game that has turned out to be more addictive, to me at least, than World of Warcraft ever was. I never thought I'd find another game that could pull me away from WoW...but this one sure as hell has. What game is it?

What's even more surprising is that this game isn't even out of its Beta phase yet. I know right? Crazy! A game riddled with bugs, an inferior UI, horrible combat, resource grinds and so-so graphics optimizations has pulled me so far from WoW that I rarely have the urge to log in any more.

So, if the Beta of Landmark is such a mess, what's keeping me away?

The complete freedom of building what I want, when I want and where I want...well, for two more weeks at least.

At the end of the month, Daybreak Games (formerly Sony Online Entertainment) is doing a complete character/progression wipe before implementing a bunch of changes and additions to Landmark for us to test.

I will be losing one year's worth of building resources (which number in the multi-millions), building tools, crafting tools, weapons and armor. Back to beginner status for us all!

But, that's okay. I'm sure it won't take me too long to replenish my inventory of everything I'll be losing. Then I'll be right back at doing what I'm loving...building!

Since starting Landmark last year I have been one big, building fool. I have created I don't know how many different claims in as many different locations. I've been building houses, space ports, ski slopes/lodges, furniture, alphabets, galleries, various designs and do-dads, stair cases...and god knows what else. If I can think of it, I can build it...and I'm LOVING it!!!!!

Will I be coming back to WoW full time anytime soon? Hmmmm....doubt it. I came back for the release of WoD. I got a kick out of the garrisons, liked the changes/additions to pet battles, had fun gaining followers and even got 3 toons to max level. And then I got bored.

I'm sure I'll pop in every now and then to piddle around...but Landmark's where I've hung my hat. And I can't really foresee anything pulling me away.

Will I be abandoning the blog for months on end again? I hope not, but no promises.

I'm actually giving thought to start streaming my time in Landmark. Need to think on it more though. Not really sure what else I can offer that differs from the many other streamers the game has. If I do end up streaming, I'll post info here on it in the off chance that any of you would be interested in seeing what I'm up to.

For now, I'll post some more images of things I've built in Landmark for you to browse through. Check out the "My Landmark Builds" for those images.

Take care and hugs all around!

I would like to apologize for being a complete and utter dork. I went to the Blizzard store to purchase your pets, the Guardian Cub, and found that it is no longer available. They retired that pet last month on June 18th (according to a Wowhead comment).

Talk about being an inept contest host!

I have emailed you both explaining this and asking you to visit the Blizzard store to choose any other pet they offer. Please let me know which one you would like.

I am posting this here in the off chance it catches your eye before you check your emails.

First, I would like to say "Thank You!" to everyone who has participated in my transmogging contest. It has been loads of fun seeing the outfits you all have come up with each month. At some point and time I might hold another one.

Now, on to the good stuff. Again, we had some outstanding outfits submitted. It looks like you all had a lot of fun with violet/purple.

Our winners for July are: 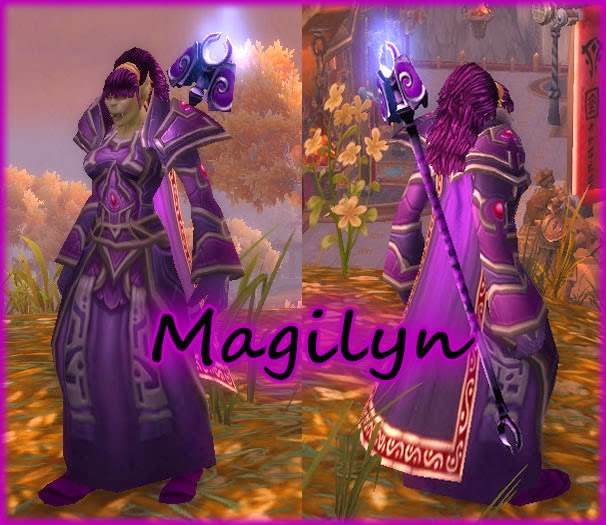 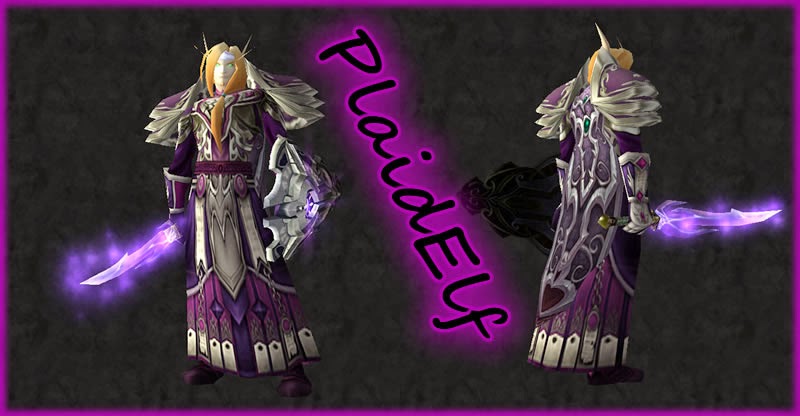 Please choose your prize from the list below and let me know, either in comments here or by email, which prize you would like.

Here are all the entries, in no particular order. 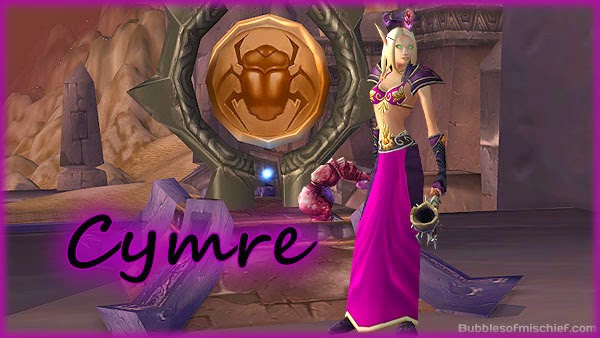 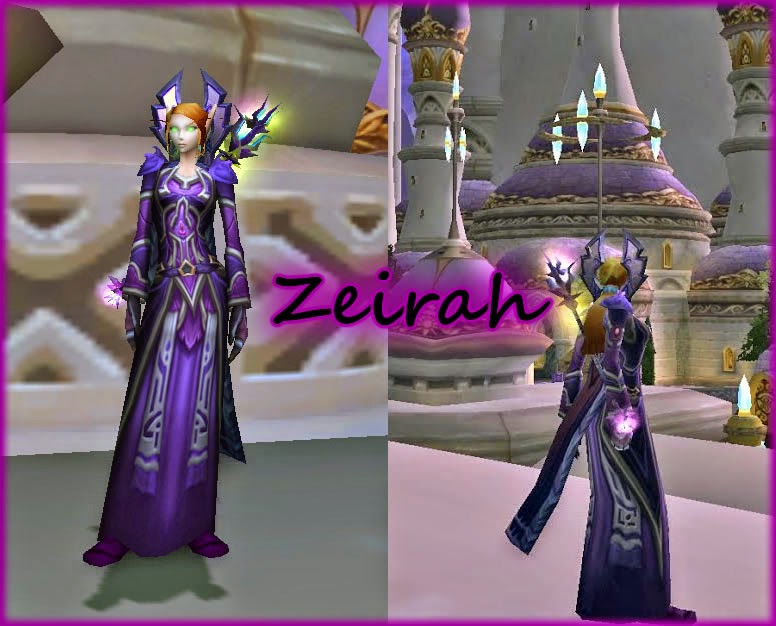 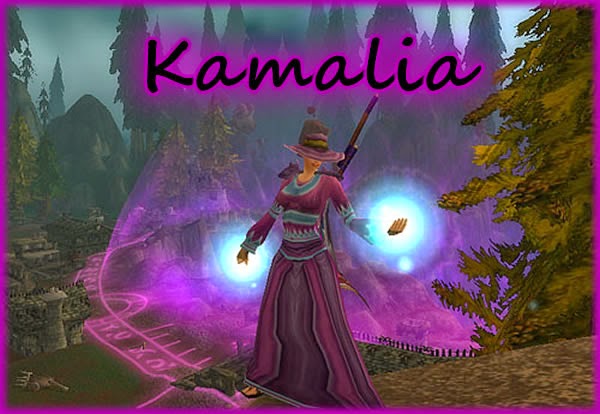 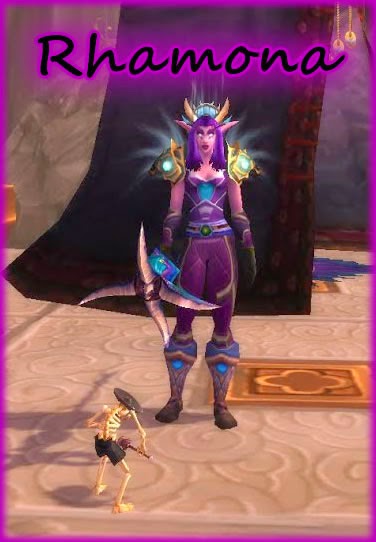 Well done all! Thank you again!!!

I want to thank everyone who has been taking part in my ROYGBiV Tmog Contest over the last 5 months. I dearly appreciate all of you. Whether you've been submitting entries since February or are submitting your first entry this month, I truly thank you! I hope you have all been having fun.

Today's post brings us to the last leg of the contest. This month's color is Violet, or any shade of purple really. Knock me out with your outfits everyone!

This month's prizes will be the following: 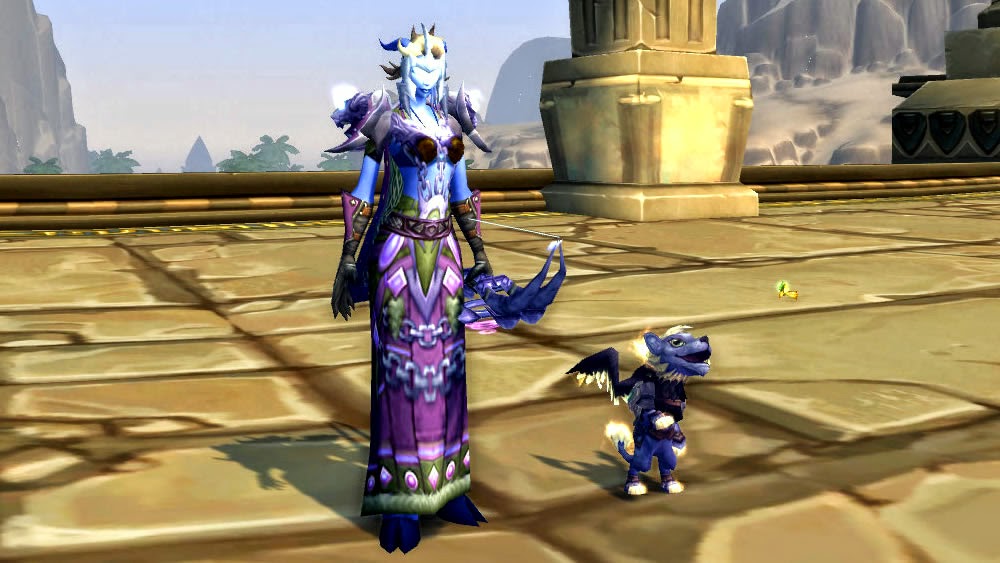 I'd also like to mention, if you hadn't noticed, that I took part in the contest as well. In each of the photos I've posted for each month, showing what the Blizzard Store Pet would be, I've donned my best interpretations of the colors. I also tried to get the screenshots taken in a location that best suited the pet I was giving away. Hopefully you've enjoyed the photos as well as the contest.