Taking Pets to Another Level

When we were first given pet battles in game, I had scoured the interwebs to learn as much about the new feature as possible. Among a few handy addons I found, I came across this little gem:

The above website is basically an "all-in-one" site to find information on pet breeds, types, abilities and to keep an eye on your own collection of pets. It is a wonderful tool for those of us that like to battle and collect our pets.

If you've taken a quick peek at Warla's site, or have been familiar with it for some time like me, you can imagine how thrilled I am to have access to it when I read the following in Wowhead's compiled list of information about WoW's next expansion:

When I read that I instantly thought about Warla's site. Why you ask? Because Warla's site lists the gender of pets as well as all the other information about battle pets.

This means that I can check the list of my personal pets, to see what genders I already have, so that I know what gender of pets I need to go get in order to be ready for breeding them.

As you can see in the above image, there is a lot of information you can find out about your pets. What we are most concerned with right now are the ones colored blue and pink in the "Breeds" column.

Blue denotes the males we have, pink the females. This is what will make all our lives easier, in a manner of speaking, when it comes to acquiring the right gender of pet.

In the above picture you can see what happens when you move your mouse over a pet in the "Breeds" column. A handy-dandy little window pops up that gives you more information about the pet in question. As you can see, I have the breed 11 (or S/B) of a male Alpine Foxling Kit. Now all I have to do is decide if I want to go on the search for a 13 (B/B) or 21 (S/B) breed female.

Sadly, not all of the available pets come in both male and female genders. This makes me wonder if we will be able to cross breed our pets? Or will we only be able to breed pets of the same family?

A few other questions I have are:

I am sure more information on this will be given to us as we get closer to the opening of the beta. In the meantime, I'll be busy traveling the lands of Azeroth to acquire as many male and female pets I need to get pairs of them all.

Feel free to call me Noah from here on out.

In the summer of 2012 I connected with an old school mate through Facebook. During our reconnecting conversations I found out that she played World of Warcraft, and had been for some time. I created a character on her server so we could chit chat and get together and goof off at times.

Her toons were Horde and on an RP server...wow talk about sticker shock, so to speak. I am no stranger to the Horde side. I have a few Horde bankers here and there and had created Horde toons in the past to test their waters. But, an RP server? Hmmmmm...this could be interesting.

Trying to be as RP-ie as I could I created a Tauren Death Knight and named him 'Mootamir'. My train of thought was, "Hmmm...DK Tauren...what's a good "deathie" name?....death...cemetary...funeral home...what kinds of names would I associate with a funeral home?....Mortimer...ya...that sounds deathie and creepy...OK, Tauren on an RP server...name has to have 'moo' in it....Mootimer?....no...I'm not a moo timer....Mootamir! Yep, that'll do." Hence, Moot was born.

After Moot's creation, and after I got him out of the DK starter area, I whispered my school mate and she invited me to the guild she was in. I was promptly greeted with welcomes from quite a few people, which was a nice feeling. I soon learned that my school mate's guild was a very active one, which was also nice because things had been growing pretty quiet in my regular guild and on my regular server.

It didn't take me long to level Moot to 90...at least in play time that is. In total it probably took about a month. I let Moot sit for a week or so here and there to gain rested XP.

I don't remember exactly when, but things kind of picked back up in my regular guild. Moot got very little play time for quite some time...like 6 or 7 months...maybe even more. Anywhooo, things got quiet again on my regular server and I thought I'd pop on over to Moot and see what all was going on.

To my surprise, every time I logged onto Moot there were never less than 10 people online. This was a shock. For the longest time, more than a year or two, my regular guild never had more than 4 people on at once. More often than not, it was usually just myself and one other person online.

Little by little I started playing Moot more and more. I started to get to know some of my new guildmates and join them in some activities. I also found out that my school mate was no longer in the guild and was glad/surprised they hadn't booted me when she left.

As I became more active with Moot I saw I was starting to be in need of some financial assistance...poor guy never had more than 2k gold on him at any one time. With the new Timeless Isle (or, as some have started calling it, Loot Island) it took very little time to get Moot's gear from a sad 440- something ilvl to just under 500. I was able to start doing Flex raids with my new guild. But, I was still lacking in some necessities.

I started thinking about which of my toons I could server and faction change with to lend Moot a hand. First, I thought of Sheeturself. She was the toon I was playing most on Alliance side. But, I thought, Blizz might make me do a name change. So far it seemed like I had been flying under the radar in the sense that Blizz hadn't made me change her name already. So why rock the proverbial boat? Plus, she's one sexy Draenai. Why ruin a good thing?

Then I thought of my Warlock, Sheetahn. Nah...can't do it. I mean she's a Gnome Warlock...can it get any cuter than that?????? How 'bout Weland, my Paladin? Nah, don't really "need" two plate wearers just yet. Humphrey, my mage is fun, why not move him? He's already gotten a lot of gear from Loot Island so it won't take much to get him Flex ready. Nah. I've got TONS of Loot Island gear sitting in one of my banker's guild bank that is mail and leather. I should move a toon that can use it instead of it sitting collecting dust.

Well, that leaves just Thelandira. She's not 90 and can't use the gear yet. But, she's only 88. That means that it won't take long to get her to 90. And while doing so she can gain reputation points, through questing, for my new guild. Yay! Kill two birds with one stone.

Then, it took me about 3 weeks or so to finally decide to move her. Thela was the third toon I ever created and was the first toon I joined Nighthaven with. Was I really about to move her???? Nighthaven, and Echo Isles, has been her home since early 2007. Over the course of those three weeks or so I talked myself into moving her and right back out of it. It just felt weird...and wrong.

In the end, the decision to move her won and I started getting her ready. I cleaned out her bank of things she really didn't "need". Then, I pilfered things from my other toons and bank alts of things she would need without having to farm them up all over again. I robbed my Alliance toons of a little less than half of all their gold and sent it to Thela. Then I was off to my Battlenet account to make the move.

I was nervous as ever after reading that the move could take up to 72 hours. Yikes! The thought of stressing out over the next few days as to whether or not all her items and gold would transfer over was a bit much. Thankfully, and much to my surprise, the move took a little over an hour. YAY!  I quickly checked her bags, bank and Void Storage and was happy to see it all came with her...with the exception of Dartol's Rod of Transformation.

Thankfully, you can get Stave of Fur and Claw by getting exalted with Timbermaw Hold. But...it's not the same.  :o(

My new guild, Kinsmen, welcomed Thela with open arms. She was immediately invited in and has been building bonds with her new guildmates.

I leveled her in no time to 90 and donned all her new Loot Island gear. I've not run Flex with her yet, but am sure I will in time. The few times I've run Flex with Kinsmen has been on Moot as a tank...which is fine. I enjoy tanking. Plus, I'm a little nervous raiding with Thela. I know I'll put out poor dps and don't want to be known as a "huntard". hahahahahahahaha

Long-story-short, I know...too late, Thela has a new groove, in a new guild, on a new server. Ladies and gentlemen, I present to you Thelandira, the Orc, of Kinsmen. 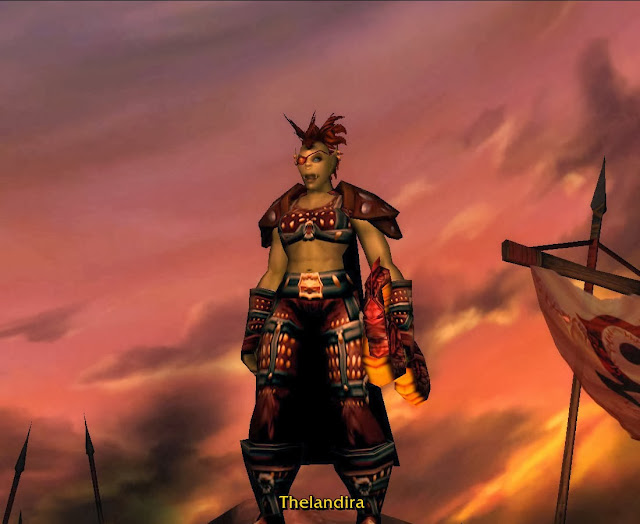 Thank you very much Kinsmen for making me feel welcomed and at home. I look forward to getting to know as many of you as I can as well as having fun times with you all.

P.S. - female Orc dance is HORRIBLE!!!!! And, I miss my idle bouncing that Thela did as a Night Elf.

Posted by Jstmel at Saturday, November 02, 2013 No comments: